“The Word of the Lord endures forever” This became one of the main slogans of the Protestant Reformation ignited by Dr Martin Luther when he nailed his 95 Theses to the door of Castle Church in Wittenberg German in 1517. This year marks the 500th anniversary of that event, more broadly when the Christian church in the west divided off of the Roman Catholic Church.

The Lutheran Layman writes, quoting from “Concordia the Lutheran Confessions”: The Word of the Lord Endures Forever is the motto of the Lutheran Reformation, a confident expression of the enduring power and authority of God’s Word. The motto is based on Isaiah 40:6-8 quoted by 1 Peter 1:24-25. It first appeared in the court of Frederick the Wise in 1522. He had it sewn onto the right sleeve of the court’s official clothing, which was worn by prince and servant alike. It was used by Frederick’s successors, his brother John the Steadfast, and his nephew John Frederick the Magnanimous. It became the official motto of the Smalcaldic League and was used on flags, banners, swords, and uniforms as a symbol of the unity of the Lutheran laity who struggled to defend their beliefs, communities, families and lives against those who were intent on destroying them.*   http://www.lutheranlayman.com/2013/03/what-does-vdma-mean.html 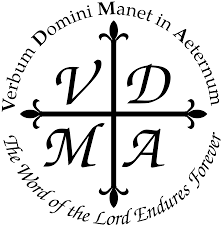 The Reformation was far more than Dr Luther nailing his Theses into the church door. His issues sparked events that would go well through the 16th century and be remembered 500 years later.