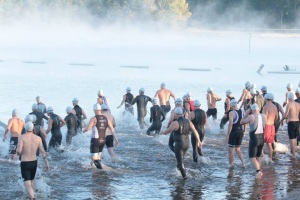 Note the fog bank in front of the swim start

One of the new developments in triathlons is digital photography allows pretty much every race to take pictures of everyone in action and provide the pictures for free. Which is nice but seeing mine reminds me I’m getting older and am one ugly human being.

This was an interesting race, but rather tiny. I think they said the number of competitors was around 190. I’ve been in races of over 1100. The air temp was around 41 and the water temp around 71. Well the effect of that is usually condensation in the form of fog. And so it was here. Had to keep trying to find the six foot high course markers. The swim is hard enough and you have to keep stopping or breast stroking in order to make sure you’re still in the course. When you can’t even see the course well… You had to go back through a rather narrow opening in a stone wall in order to get into the area where the boat ramp is. Well that entire area was backdropped by the sun. Ever try to see through fog when the sun is shining through it? Well I have. I was kind of floundering through the swim.

Had a decent ride, going at a 4:05 pace which is for me, respectable and a decent run. I added North Carolina to the states that I’ve done races is. It now goes from Maine to North Carolina and then west to Kansas with the exception of Indiana.

Thanks for the interest, support the forum to share, it will now be a long dreary winter until my next race.