Now this is of course pooh-poohed in the world. The world will either give us some vague idea of being part of the universe, being a drop in the eternal sea. Or that our life really has no meaning, once and out, rotting in the ground, or eternal birth, death and rebirth. These are not of a gracious God, these are of a sadist, who wants to take away any hope or meaning. In the resurrection, I will still be Jim, I will be in a very physical body, I was made to be physical and while there will be a time in the spiritual, assuming the Lord returns before I’m called home. But the resurrection will be life that God had originally intended, the ideal world of the Garden. In the resurrection, the world that we have will be familiar, but it will be a perfect world.

So as you can see the resurrection isn’t just a quaint notion, some esoteric bizarre promise, but it is that which through Christ’s death we are made holy/righteous/just through Him. That we are saved to eternity to be resurrected in a perfect body, a perfect world that will not deteriorate, where there will be no sickness 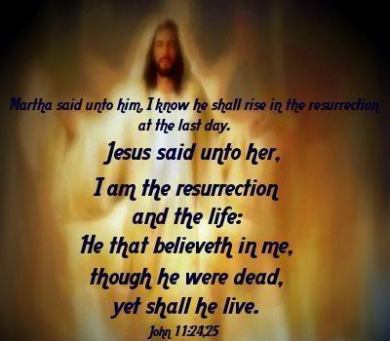 there will be life eternal, no death. Our lives will be challenging, rewarding, enriching, always something new, there will be love, compassion, encouragement. It will be life on an upward slope. certainly challenges, but always a way to achieve, learning and ultimately over coming, because we will be in the presence of Him who “These shall make war with the Lamb, and the Lamb shall overcome them: for he is Lord of lords, and King of kings: and they that are with him are called, and chosen, and faithful.”
So when we listen to the world, a world sunk in sin, death, no hope, no promise, that it will result in death and destruction just like the death Satan will suffer, you are listening to a world that does not know what it’s talking about and is lost in death, destruction. When we know the resurrection by faith, when the Holy Spirit has put that promise on our heart, we really don’t need “proofs”, but when we witness to others, we can point them to the facts and away from the fantasy and hopelessness of the world.

Tim Chaffey in “Answers Magazine” (April – June 2014 pp 34-37) discusses what the world proposes as “answers” to the resurrection. That it was a case of mistaken identity. Really? On its face its pretty weak, why would the people involved buy into something they knew to be false? Would the Romans execute the wrong person? No! The disciples were good, strong, intelligent men, would they willingly teach something they knew to be nonsense? To what end, at what price? ‘

There’s the “swoon theory” as if a Roman soldier wouldn’t know when someone was dead and would allow him to be taken before he was. That is just ignoring historical fact.

The body was moved. Again ignoring fact, if the Romans, Jews, anyone involved knew where the body was they would have revealed it. Why would people afterward go out and perpetrate an obvious lie?

Visions, that is, the disciples pretty much imagined this whole thing. The premise of a lot of these theories is that the disciples were just kind of stupid country bumpkins, they don’t say so explicitly, but the inference is clear. Jesus’ appearances were attested to by a number of people, one person who was completely antagonistic to Him, Saul of Tarsus, who Jesus renamed Paul when He gave Paul the charge to witness to Him among the Gentiles. There are others, that there was a family tomb. Which is just weak, what difference does it make? If Jesus was dead, where He was buried would be common knowledge. Seance? Really, come on, now we’re just kind of projecting our current culture on to a people who just wouldn’t go there. Annihilation, some unexplained reason the body was destroyed and no one’s discussed it since, that it’s some kind of coverup. Again, that would just be a serious ignorance of history. Wrong tomb?

Chaffey lists out the following: Jesus testified to His resurrection before and after the fact. Luke writes in Acts 1:3, that “Jesus presented Himself alive after His suffering by many infallible proofs. There are at least ten “post-resurrection” appearances of Jesus. He appeared to Paul, Peter, James, individually, the rest of the apostles and over five hundred at once. “Most of these people were still alive when Paul wrote these words, implying that his readers would check with these witnesses if they didn’t take his word for it.”

James, Jesus’ half-brother, in fact all of His siblings, thought that Jesus “was out of His mind”. After the resurrection, James becomes, essentially, the first Christian bishop of Jerusalem. He continued to be an important Christian leader until he was martyred, dying for the truth of the life, deity and resurrection of his half-brother.

When Jesus was arrested the disciples ran away, after Pentecost, these men willingly went out into the world to proclaim Jesus and were martyred as a result. The resurrection was preached by the disciples from the beginning, the resurrection was the center piece of their teaching, it was what the Christian church was built on. These people weren’t in a position of power to force these teachings on anyone, and yet they were believed, and the church grew, even through martyrdom, persecution and deprivation. Chaffey points out that they did not help their cause by reporting that the first witness to the resurrection was a woman. Like it or not, in that time, the testimony of a woman and one who, may or may not, have been a prostitute, but attested that she had seven demons cast out of her. This would not be a well received testimony, certainly would not have improved the case of ordinary men, making an extraordinary claim.

There is no plausible argument to deny the resurrection, many have been tried, but these arguments deny and/or contradict the historical facts. The resurrection is fact, not just to prove a point, to make a case. But it is fact according the the life and promises of God incarnate, Jesus the Lord, but it is also to give hope to a hopeless world. The world is lost in sin and death, there is no other possible outcome, except for the resurrection promised to us by God the Son 2,000 years ago, by His resurrection from the dead.