The featured picture is looking down from the top of Masada, in Israel, in the Negev desert. The fortress was built by Herod the Great. Herod earned “The Great”, because of his many impressive structures that he built in many places in Israel. Masada was intended by him as a place of refuge, but ended up being used by Zealots holding out against the Roman army.

The feature right in the center, that looks like a ramp? Well it’s because it is a ramp. The Romans built this ramp in order to get access to the fortress. Which they finally did, only to find that all the defenders had committed suicide. It is staggering to imagine how day after day the Romans are building this ramp, right under the view of the defenders. Equally staggering on the part of the defenders, knowing that day by day their doom was right below them.

The square outlines are where the Roman Army encampments were while they conducted the siege of Masada.

This is a picture of the interior of Masada, at the top of the mountain. 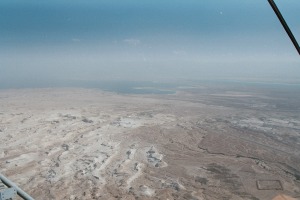 The Negev desert from the top of Masada, in the direction of the Dead Sea.

A storm building over  the Negev and I believe, that this is in the direction of Egypt. While we were there a factory was blown up by a missile fired from the Gaza strip. We could see the smoke, and there were a lot of military aircraft overhead while we were in the area.

I really have a lot of respect for the country and the people of Israel. I still stay in contact with a few people there. They live under tough conditions and I thought this was an inspiring picture, a reminder of those who defended this fortress and their 21st century descendants who defend their tiny country.